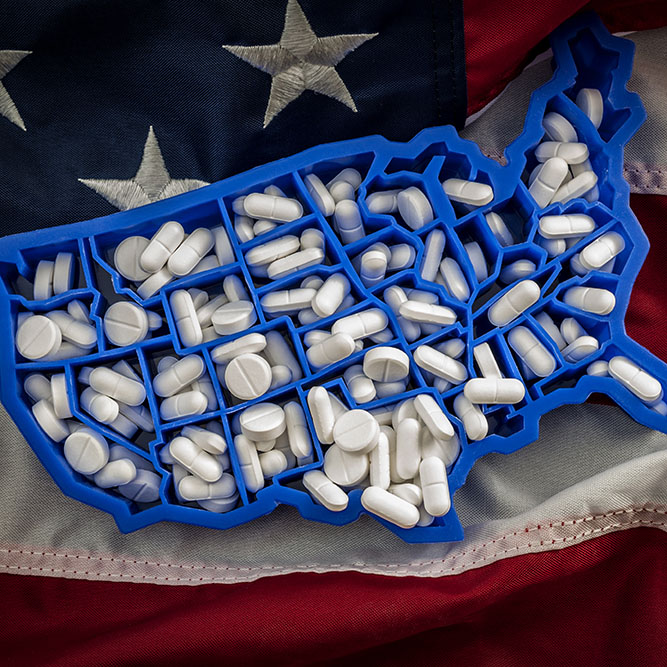 The opioid epidemic has been felt all across the United States. Everyone you talk to nowadays either knows someone that’s currently affected by an opiate addiction problem or has dealt with it recently. Nobody is safe from the silent and deadly plague. It has torn across the nation at an unprecedented speed and left misery and sadness in its wake. And it finally reached a cresting point a few years ago, making headlines in the news and becoming a pivotal talking point in the 2016 Presidential debates.

The conversation was needed. When you look at all the contributing factors for deaths in 2017, you can see the deaths that resulted from opioid overdoses (47,600) were actually on par with the total loss of life from the AIDS epidemic the year it peaked in the US—approximately 50,000 people died of AIDS in 1995. So that helps put the opioid epidemic into perspective for you.

But this is far from the first time that Americans have faced an addiction problem that stemmed from opium poppies. In fact, ever since the robber barons realized that dealing drugs was a quick way to riches, they’ve played a part in spreading narcotics all across the globe. And I’m not talking about the type of drug dealers that you see on a televised series or full-length feature film that plays the part of a villain, either. Nope. What I’m referring to are the tycoons of capitalism that ushered in the Gilded Age in the West.

The 19th Century presented American business moguls with new golden opportunities. Prior to the United States’ independence, all foreign goods brought to the colonies were through a British monopoly. But now, America was a sovereign nation. And foreign trade was a lucrative business opportunity for American citizens with the necessary funds.

However, the new trade venture with China brought complications of its own. For starters, the Chinese weren’t very interested in American goods. That left America in the same precarious situation of their British counterparts. The newly created nation tried selling numerous goods to the Chinese, but most failed.

There were some items that the Chinese did want, though. Americans found a bit of luck with trading furs, sandalwood, cotton, and ginseng to the foreigners. But even with those sales, American shipping companies found they were a victim of a trade deficit. So American merchants tried to figure out which goods the British were managing to peddle to the Chinese.

When the American companies realized Britain was selling opium that it got from India, it wasn’t long before smuggling opium became an American strategy for success, too. While America’s opium trade never reached the heights that Britain managed, it contributed to the United States’ newfound trade surplus.

The booming opium trade helped produce one of America’s first multimillionaires. John Jacob Astor had become a successful fur trader and investor of real estate. And he made a large portion of his profits from the Chinese trades for his furs. But when his ships would sail to China, they would dock in India and Turkey first, picking up large supplies of opium to smuggle into the Chinese borders.

But he wasn’t the only American doing things of that nature. Every merchant trader from the United States was following suit behind the British. Even Warren Delano, Franklin Delano Roosevelt’s maternal grandfather, had made a vast fortune selling drugs to the Chinese populace. But the opium trade didn’t stop on China’s shores, either.

Seeing how profitable it was to deal opium to the Chinese people, those same American companies took it upon themselves to supply the United States with its opium supply, too. And there were plenty of people in America who desired the euphoric pleasure that opium provided. Store shelves supplied laudanum tinctures that were available to anyone—no prescription required. It was the cough suppressant colonial Americans had access to. But they also used opium for a wide variety of ailments.

A few years after China legalized opium, the United States had begun its Civil War between the Union and Confederates, which led to tens of thousands of people injured on both sides. Luckily, thanks to the American opium trade, a stronger pain-relief medication was within every doctor’s grasp.

The isolation of the morphine alkaloid was done by Friederich Serturner at the beginning of the 1800s. The result gave consumers easier access to opium’s primary molecule. As such, users would obtain the needed medicinal effects from smaller batches. Since the isolated compound was a stronger drug and caused drowsiness rapidly, it took its name from Morpheus, the Greek god of dreams.

As a powerful analgesic remedy, medical professionals slowly started adopting its use as the primary tool for pain management. Morphine was also used for other conditions that were adopted by opium already. And that list is too long to name them all. For at that time, social acceptance of opium was akin to alcohol. By the end of the century, opium dens were springing up not too far from saloons.

But the game-changer for opiate use really kicked off after the year 1853 with the invention of a breakthrough medical device that allowed doctors to easily administer drugs into the patient’s bloodstream. That is the year that the hypodermic needle came onto the scene. It wouldn’t be long before the needle was supplied to consumers in the packaged drugs they bought from stores, giving the addictive properties of the drug more hold on its users.

By the end of the Civil War, almost a half-million morphine addicts had developed their dependency on the drug from the bloody conflict. And those numbers only represented America’s injured soldiers. Including its civilian citizens, morphine addiction was becoming an unstoppable force.

As if morphine and its derivatives that were flooding America weren’t already bad enough, an English chemist who worked for the St. Mary’s Hospital Medical School in London figured out a way to synthesize the morphine alkaloid through acetylation into diacetylmorphine—the scientific name for heroin. This occurred in 1874, but it wouldn’t be until two decades later that the German chemist Felix Hoffmann resynthesized the substance for the pharmaceutical company he was working for. And that company was no other than Bayer: the same company that created aspirin.

The company’s trade name that was labeled on its new drug was “heroin.” And just like aspirin, Bayer marketed heroin as an over-the-counter medicine for aches and pains. Furthermore, the company saw a way to capitalize on all of the opiate addicts that had developed in every nation by falsely claiming that heroin was a safe and non-addictive substitute for morphine. Several misleading advertorials were put out by Bayer. They even put out flyers and advertorials promoting heroin as a no-risk medicine for children.

Within no time, bottles of heroin were flying off the shelves. Every addict flocked to the new drug. And since heroin is stronger than morphine, it definitely did the trick. But it wasn’t long after heroin had hit the market that the non-addictive claim had begun to get challenged. By 1899, reports were already surfacing that people were building up a massive tolerance to heroin along with terrible withdrawal symptoms that were beyond anything seen from morphine.

It wasn’t until President Roosevelt appointed Dr. Hamilton Wright to the position of Opium Commissioner of the United States that any headway was made into battling the opioid epidemic. (Ironically, President Roosevelt’s grandfather was one of the opium traders who had made part of his fortune by dealing drugs across the globe.) But a few years after the Opium Commissioner started tackling the subject, the United States Legislature passed the Harrison Narcotics Tax Act of 1914.

But underneath the façade of the bill, it did nothing to stop drugs from entering our country. Instead, as with most of US legislation, it gave companies with the most money the advantage of scooping up the business from smaller operations and set in motion the projected growth of the pharmaceutical industry in our nation that would soon follow. The initial arguments for the bill were less about the safety of the populace and more about its focus on the immigrants and colored folk that would be jailed once caught breaking the law.

A decade later, Congress passed the Anti-Heroin Act of 1924. Afterward, the United States and members of the League of Nations started focusing on complete control of all narcotics, giving those governments total domination of the market. But as we’ll see in our next article, drug dealing would always remain a huge part of our government’s culture.